You are here: Home / Duct Test 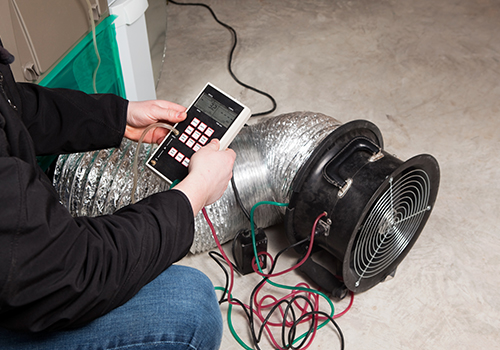 CFM Pros provides services for duct leaking testing on residential units in Florida. Our professional and specialized team has great experience in this area due to an extensive amount of tests done and the ability to handle different multifamily buildings as well as production projects that contain significant quantities of residences. Our team will perform all the appropriate tests quickly and precisely. We can guarantee excellency and optimized results for you.

When we talk about duct leakage, it is important to know that every cubic foot of leaked out air should be made up by a cubic foot of air blown in by the fan. That is why we need to measure its amount of air moving through the fan in order to quantify the duct leakage at the test pressure.

To test it, the standard pressure used is 25 Pascals, that is close to the operating pressure of a typical duct system. The number obtained will be an estimate of how much air leaks out of the duct system while it is functioning.

Since each duct leakage represents different problems, they would require two different tests. The malignant leak tends to occur in ducts that are outside of the conditioned space, or outside the building envelope, in building science jargon. Therefore, its test is called the ‘outside leakage test’ or the ‘leakage outside the envelope test.’  The other one (for “benign” leaks) is the “total leakage test.”

As regards the way in which leaks can be found, there are several forms to do so. Some of them are more recommended than other considering effectiveness.

The main ideas behind using a duct leakage tester might be:

How the Test Works

To begin with, the Duct Blaster fan blows air into the duct system which might be attached to the air handler as probably, at the same time, it will be connected to a return vent. The crawl space and attic are both vented and thus close to the same pressure as outdoors.

Then, air will leak out through every hole in the duct system, when the Duct Blaster is turned on, and it is brought up to 25 Pascals of pressure. Some of the leakages will be benign, and some will be malignant, as it was already stated.

By eliminating the duct leakage from the conditioned space, you will isolate the amount of malignant leakage in the duct system. This process might be easy to do due to two conditions which should be met:

It would be impractical to get rid of the holes, and it might sometimes be impossible, so the main point to find out how much the ducts are leaking to the outside, would be to eliminate the pressure difference across the ducts inside the conditioned space.

The result will be that the air blown into the ducts will leak outside of the conditioned space, providing a measure of the ‘malignant’ duct leakage. This number is given as the straight cfm25 or as a ratio of the cfm25 to the conditioned floor area served by the system tested.

No matter which of these alternatives you choose, you have to make sure that you know whether a normalized duct leakage number is referenced to the floor area or the air handler flow because they might be quite different.